In this post I’ll tell about my first experiences with the new Nikon D810 camera. According to Nikon marketing it includes many improvements over its preceding models D800 & D800e which were released in 2012. It was very interisting to see in practice how much better this new model is. Although both cameras have excellent 36 megapixel sensor and in theory the same AF-module, the D810 includes newer versions of these components. Also the price has gone upwards somewhat compared to cheaper D800 model. 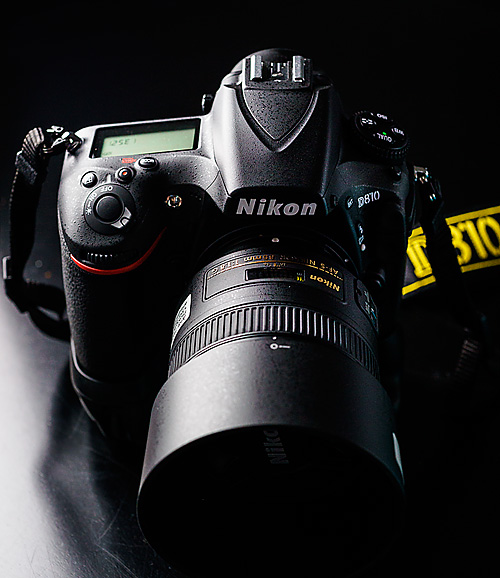 After first days of with the D810 I would say that its most important improvement is the updated AF-system. It seems to do its job faster, more accurately and more reliable while using the same lenses. The older D800 seemed to have some problems with AF accuracy and reliability depending on lens aperture, distance and lighting conditions. In my mind it’s quite telling that with the D810 I don’t need set AF Fine-Tune for my Nikkor AF-S 50mm 1.4G -lens anymore. With the D800 I had to set Fine-Tune setting -15 for this same lens.

The D810 also includes new AF mode called Group Area AF, which means that the D810 will use 4 additional focus points around the selected focus point. In practise this mode worked even better than I had personally anticipated. It provides faster AF speed with consistent results especially in dim lighting conditions when using only one focuspoint would easily hunt somewhat before locking the focus. With Group Area AF in use there was not much hunting and focusing was really reliable overall. Focusing was ready very fast for shutter release also in ‘Focus Priority’ mode. Although this mode has apparently been designed for use with continous AF and moving subjects, I found it also very usefull for spontaneous snapshots in diffucult lighting.

Other important improvement if the new shutter mechanism which is quieter and causes less shutter shock effects. The difference in shutter sound is quite pronounced although the old D800 is not the loudest machine in this regard. In addition the new model has also electronic first curtain shutter (EFCS) which should also reduce vibrations. At the moment, the EFCS works only when the drive mode is set to M.L.U (Mirror Lock Up). This is in fact quite illogical while in Live View mode because the mirror is already up. To use EFCS succesfully requires thus always two pushes to shutter button. I hope this will be fixed in a future firmware.

Also big improvement is better peformance in Live View mode. The screen shows sharper image while zooming in to 100% and it is not interpolated anymore like with the D800. One of the most annoying things with the D800 was the long delay after taking a photo in LV mode. The delay before camera was usable again was easily over 2 seconds for single image (with fast Lexar 1000X CF card). Thankfully this delay is now much shorter with the D810 making workflow more fluent with Live View. I would say the blackout time from shutter realease to screen activation at most 1 second now. It should be mentioned, that already the Canon 5D mkII released in 2008 has short delay and also uses EFCS while shooting with LV activated. However while comparing image quality, the Canon cannot compete against the new Nikon camera.

Good usability is an important part of photographer’s workflow and the D810 has some improvements in this area too. Located behind camera near the LV-selector is now new i-button, which opens a context menu depending on the camera’s current mode. For example in video mode it allows fast access to video options, and in playback mode it opens a menu with image processing functions. I find this very welcome addition to user interface as it provides faster access to some important settings without having to access the complex main menu.

Light metering mode selector is now relocated on top of the camera in the place of former BKT-button (Bracketing). This is apperently because of additional new metering mode available which is called ‘Highlight Weighted Metering’. In this metering mode camera tries to prevent hightlights from overexposing. You may want to use it fe. in situations where the subject is surrounded by dark background. I actually like this change too as the metering mode dial in D800 was quite hard to use while using the OVF. With the D810 it’s accessible while using the OVF. The bracketing function has now new button located the left of the integrated flash.

In general I find the user interface of D810 very usable and obviously designed for real photographers. Position of each control is quite well tought in my opinion, and the camera is well customizable. The most important settings can be changed quickly. I find the ergonomics better with this camera than with say Canon 5D series. The latter has some issues for left eye dominant photographer like the position of thumbwheel which is also used for changing aperture or shutterspeed.

New video features I’ll not examine in detail in this post. Anyway there’s 1080P 60 FPS mode available and zebra display in video mode which naturally are welcome additions. At the moment however, the zebra function is not available in the still photography mode. This is a shame because the feature has been usefull in certain lighting situations with my Sony Alpha 7R. With the Sony it is also possible to set the actual zebra level and set this settings to one of the custom buttons.

For flash photography there also small, but quite welcome improvement. Hot shoe mount flash can now be set to off also from the camera’s flash settings even if the flash unit is on. The good thing about this is that one can use the AF-assist lights of fe. SB-700 flash for focusing in dim light without using the flash light itself (when it would ruin ambient lighting). Some SB-series flashes don’t allow setting flash light of from the flash while it is on. Shortest x-sync speed is still 1/320s and it is 2/3 stops faster than in Canon 5D mk III. Faster speed can be used with a dedicated Nikon flash, but this means that flash power will get smaller as shutter speed rises.

High ISO noise in also somewhat reduced compared to the D800. Additionally the sensor boasts now ISO 64 as the new base ISO. This produces somewhat smoother noise in shadow areas than ISO 100 does, but it remains to be seen how much this benefits the maximum dynamic range. The sensor also lacks AA-filter altogether means slightly sharper details compared to the D800 and D800e. The IQ is in fact quite close to Sony Alpha 7R which also doesn’t include the AA-filter. The sensor in D810 is apparently newer model while propably manufactured by Sony too. 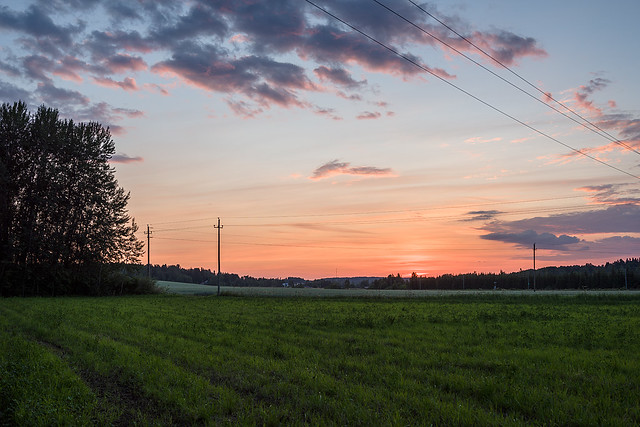 The wider dynamic range is essential in high contrast lighting situations like in the landscape test photo above (click to see the larger version in Flickr). This not a HDR photo, but instead a single exposure with shadow tones lifted up (@ ISO 100). Without post-processing the foreground in the photo would have been almost black. The photo was developed with Adobe Camera Raw 8.6RC. I had to use my own custom made color profile for D810 because current profiles supplied with the ACR release candidate are not very good at all.

Below is the same photo without adjustments done in post-processing. The foreground in this image looks way too dark compared to how the scene looked in reality. No way the shadows could have been raised as much with Canon 5D mk III without introducing too much noise to the image. 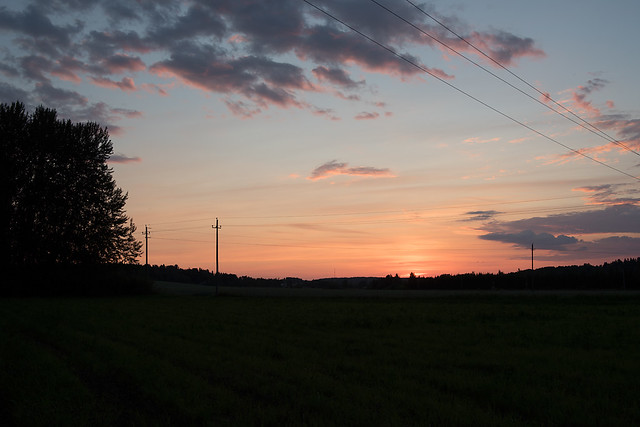 While the old D800 still produces wonderfull images, it’s quite evident to me that D810 is in fact quite big improvent over the previous models after counting in all the numerous improvements for camera’s usability and performance.